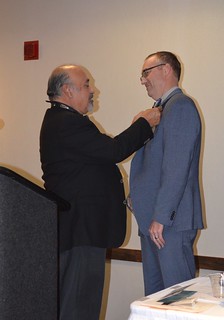 FOR IMMEDIATE RELEASE- WEST ALLIS, WIS. NOV. 14, 2019 – Dr. Thomas Raimann, a resident of Milwaukee, was sworn in as president of the 3,100-member Wisconsin Dental Association at the organization’s 149th House of Delegates on Nov. 8 at The Lismore Hotel in Eau Claire. Dr. Raimann is a retired general dentist following more than 30 years of private practice in Hales Corners.

Raimann is a graduate of the Marquette University School of Dentistry (MUSoD), where he has served as a volunteer part-time faculty member since 2014. He is a recipient of the WDA Pyramid of Pride Community Outreach Award and the MUSoD Outstanding Dental Service Award.

He has been exceptionally involved with the WDA throughout his career as a member of numerous committees and boards at local, state and national levels including the Executive, Finance, Long Range Planning, Nominating and Bylaws committees. Additionally, he served as Chair of the WDA Foundation Mission of Mercy in 2013 and represented the Greater Milwaukee Region as a trustee on the WDA board from 2007-2014.

• President-Elect Dr. Paula Crum, a periodontist in Green Bay. She has served on the WDA’s Ethics and Dental Relations, Legislative Advocacy, House Reference, Strategic Planning, Executive and Long Range Planning committees. She has represented the Northeast Region as a trustee on the WDA board since 2014.

• Vice President Dr. Cliff Hartmann, a pediatric dentist in New Berlin. He is currently an active staff member at Children’s Hospital of Wisconsin and teaches in the MUSoD Department of Pediatric Dentistry. He has served on the WDA Committee for the Dental Home Initiative and represented the Southeast Region as a trustee on the WDA board from 2012-2018.

• Immediate Past President Dr. Patrick Tepe, a general dentist in Verona. He has served on the WDA’s Executive, Finance, Strategic Plan, Long Range Planning, Board Nominating committees, the Co-Op Concept Work Group and the WDA Insurance and Services Corp. Board of Directors. Dr. Tepe represented the Southwest Region as a trustee on the WDA board from 2011-2016 and has also been involved with the American Dental Association, serving as a delegate to national meetings.

• Treasurer Dr. John Moser, a Milwaukee resident with a general dental practice in the Historic Third Ward. He is also an adjunct professor in the Department of General Dental Sciences at MUSoD. A Greater Milwaukee Dental Association past-president and former Greater Milwaukee Region trustee, Moser was first appointed by the WDA board to the treasurer’s post in 2007.

WDA trustees recently re-elected or new to the board include:

• Dr. Jon Nelson, a general dentist in Superior. He was re-elected to represent the Northwest Region and is in his second and final term.

• Dr. Tim Harper, a general dentist in Fond du Lac. He was re-elected to represent the Northeast Region and is in his second and final term.

• Dr. Angela Lueck, a general dentist in Milwaukee. She was elected to represent the Greater Milwaukee Region in her first full term.

• Dr. Laura Lux, a prosthodontist in Lake Geneva. She was elected to represent the Southeast Region in her first full term.

• Dr. Tom Reid, a general dentist in Madison. He was elected to represent the Southwest Region in his second and final term.

• Mr. Curtis Henderson, a D3 student at Marquette University School of Dentistry. He was elected to represent the MUSoD Student Region.