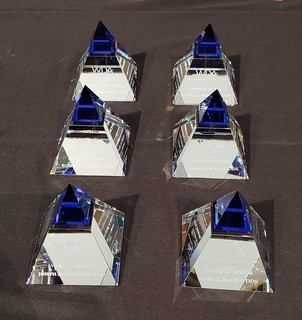 FOR IMMEDIATE RELEASE- WEST ALLIS, WIS. NOV. 18, 2019 – – Dr. Julio Rodriguez, a general dentist in Brodhead, is the recipient of the 2019 Wisconsin Dental Association Lifetime Achievement Award in recognition of the time, energy and expertise he has contributed to organized dentistry throughout his career.  Rodriguez was one of 14 awardees honored by the 3,100-member statewide professional dental organization on Nov. 8 at the annual Pyramid of Pride Awards held at The Lismore Hotel in Eau Claire.

Dr. Rodriguez has been a WDA member for more than 37 years, while showing an unwavering commitment to the profession, the underserved population and his community. He first joined WDA leadership in 2005, and eventually served as WDA president from 2013-2014, helping accomplish many legislative successes during this time. Additionally, he’s represented the WDA in the ADA’s House of Delegates as an alternate or delegate since 2005.

Dr. Rodriguez was has been previously recognized for his contributions to the dental profession as the ICD-USA Distinguished Deputy of the Year in 2013, the Pierre Fauchard Academy Distinguished Dentist Citation and the Pyramid of Pride Community Outreach Award in 2015.

He is a graduate from the National University of San Marcos in Lima, Peru, and the WDA’s first Latino president. He served as a dental officer in the Peruvian Air Force before immigrating to the United States and opening a practice in Wisconsin.

Dr. Loren Swanson, a retired general dentist of Oshkosh, is this year’s recipient of the WDA Foundation Philanthropic Award for his career-long support of the foundation and advocacy of its programs. He has served on the WDA Foundation Board of Directors since 1998, and as WDA Foundation president from 2013 to 2016. He will hold the office of past-president through 2019.

Receiving the 2019 Community Outreach Award is Dr. Glendon Bogdon, a retired orthodontist of Franklin. He has dedicated much of his career to giving back to the dental profession and public through his clinic and volunteerism. Dr. Bogdon has continued to be an active member in his community since retirement, including the co-founding of the Alzheimer’s Caregiver’s Support Group and receiving the Alzheimer’s Association’s Special Service Award in 2017.

Andrew Lehmkhul of Sobieski is this year’s Friends of Dentistry Award recipient. Since forming Edge Advisors in 2010, he has transitioned numerous dental practices and helped hundreds of dentists find employment opportunities. Andy has served on the WDA Foundation board of directors, and currently sits on the Dental Black Book board of directors and the Association of Army Dentistry board.

The 2019 recipient of the Media Awareness Award is Jenna Sachs of FOX 6 Milwaukee for her commitment to educating viewers about oral health and dental-related issues in Wisconsin. Earlier this year, Jenna contacted the WDA to help a mother who had difficulty finding dental care for her special needs adult son. With a story that went far beyond this situation alone, she spotlighted access to care issues, especially for patients with developmental disabilities.

Dr. Patrick Tepe, a general dentist in Verona, is the recipient of the 2019 Media Relations Award. He has been a vital association spokesperson for the WDA on countless topics for many years. Dr. Tepe also received the WDA Award on Honor in 2014 for his volunteer work and supporting the WDA’s legislative agenda.

Recognizing her significant involvement at all levels of organized dentistry, Dr. Katie Satula receives the 2019 New Dentist Leadership Award. She is a 2015 graduate of Marquette University School of Dentistry and a general dentist in Hales Corners.

The recipient of the 2019 Outstanding Leadership in Mentoring award is Dr. Mary Lou Sabino, an oral surgeon and associate professor in Madison. Dr. Sabino is a diplomate of the American Board of Oral and Maxillofacial Surgeons and holds dental licenses in both Wisconsin and Minnesota.

One of six 2019 Award of Honor recipients is Dr. Joseph Best, a MUSoD faculty member and oral surgeon in Waukesha. Recognizing the need for dentists to fulfill continuing education on safe opioid for state licensure, he has dedicated a great deal of his time to sharing his expertise with WDA members at dental society meetings across the state.

The second recipient is Dr. Mark Braden, a general dentist in Lake Geneva. Since becoming involved with the Wisconsin Dental Examining Board in 2011, he has worked to advocate for dentists and the public on several important issues. Dr. Braden has been involved at all levels of dentistry, and is a recipient the WDA’s President’s Award of Honor in 1999 and the Political Action Award in 2000.

The next Award of Honor recipient is Dr. Robert Darling, a general dentist in Sheboygan. He became WDA editor in 2015 and served until 2019. Under Dr. Darling, the WDA Journal transformed from a tabloid-style paper to a magazine-style publication, where he contributed his writing and photography talents and won several awards along the way.

Dr. Lyndsay Knoell, a general dentist in Racine, also receives the Award of Honor this year. Dr. Knoell was nominated to join the Wisconsin Dental Examining Board in 2010 and quickly moved up the ranks to serve as chair in 2012. He has worked to advocate for dentists on many public issues, and also received the WDA’s New Dentist Leadership Award of Honor in 2004 and the Political Action Award in 2008.

Next is Dr. Patricia McConnell, a general dentist in Appleton. She is praised for her passionate conviction and support of her dental team. Dr. McConnell has been an active volunteer in dentistry as a mentor for local dental students and as a participant at the WDA and WDA Foundation Mission of Mercy event and Tri-County Community Dental Clinic.

The final Award of Honor recipient is Dr. Randall Moles, an orthodontist in Mount Pleasant and member of the WDA for 49 years. He is a longtime MUSoD faculty member and a nationally and internationally recognized lecturer. He established the Southeast Wisconsin chapter of Smile for a Lifetime foundation through which he and his team have provided free orthodontic treatment to financially disadvantaged children.